15 May 089 – Prospecting with New Ideas and Perspectives | Mike Schultz

President of RAIN Group, Mike Schultz (@Mike_Schultz) is world-renowned as a consultant and sales expert. He is the co-author of several books including the Wall Street Journal bestseller Rainmaking Conversations: How to Influence, Persuade, and Sell in Any Situation and Insight Selling: Surprising Research on What Sales Winners Do Differently.

Mike’s approach to sales and strategic account management has changed the game for sales reps around the world. He’s motivated to do the work he does in memory of his son, Ari, who died at an early age due to a congenital heart defect. Mike actively works with the Ethan M. Lindberg Foundation to help other families afford the care they need for their children. 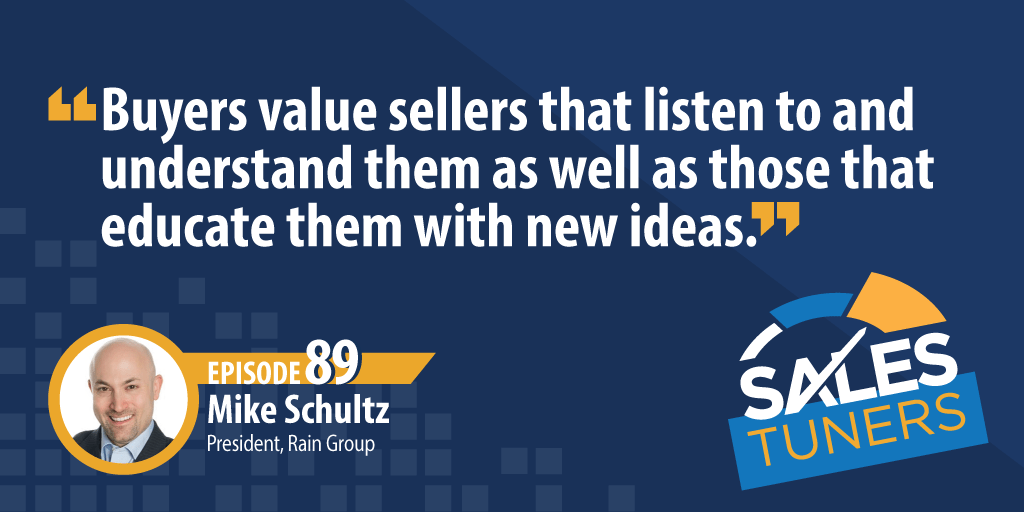 While most people spent their senior week in college partying, Mike spent his learning everything he could about sales. He seized the opportunity to lead a team which ultimately gave him the skill set to go out on his own. After more than a decade in business, Mike closes deals ranging from the tens of thousands to millions of dollars.

Being an effective salesperson, for Mike, is about being consultative. It’s not that buyers don’t want to talk to a salesperson it’s that they wish to engage with sellers who will listen to them, understand them, and add value through education.